Since the first of this year our kitty Poo has developed a skin ailment that has progressively worsened. There was some short term relief in the days following a steroid shot from the vet. The week before last we took him back to the vet and we discovered the remaining 3 teeth were infected. They suggested since he would be under for the teeth pulling they could biopsy his skin and find out what is the cause of the skin ailment.

On Friday we got his biopsy results. Not the greatest news but not the worse either. The disease is called Pemphigus Foliaceus and the vet described it as an autoimmune disease where basically his system is eating itself from the inside out. Sounds very scary to me. This week he will begin treatment with high doses of steroids to be decreased gradually over time in hopes of knocking the disease into remission.


The pictures below were taken within an hour of Poo arriving home last Monday after surgery. He was pretty drunk still and had stitches in his mouth and on the back. The back stitches is the location where they took the skin sample for biopsy. He is actually healing nicely and I will be taking back to the vet Wednesday evening to have the stitches removed. 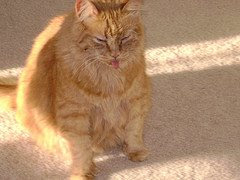 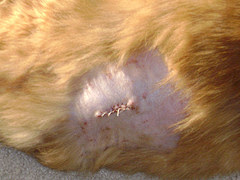 Email ThisBlogThis!Share to TwitterShare to FacebookShare to Pinterest
Labels: Kitties