Publication:The Columbus Dispatch;
Date:Jun 13, 2008;
Section:Life & Arts;
Page Number:D1
HOBBIES
Knitters get in the loop as pastime goes online
By Amy Lieberman THE COLUMBUS DISPATCH Clara Parkes, author and “yarn whisperer,” compares the knitting community to a seashell that contains a hidden world inside. For a few months, Casey and Jessica Forbes kept their knitting and crocheting Web site, Ravelry.com, as a private portal to that world. Once they gave friends permission to advertise the site on their blogs, though, its membership climbed to 140,000 (with an initial waiting list of 3,000) faster than you can say “knit one, purl two.” The rise in popularity of Ravelry.com underscores how modern technology is altering the traditional world of knitting. This week in Columbus, the hobby’s new and old worlds are meeting face to face at Knitting Connection — a three-day gathering offering 70 classes to about 1,000 knitters. “This is beyond sitting and reading a pattern stitch by stitch,” said Parkes, the keynote speaker at the convention. “People and dot-com-ers are all figuring it out together and seeing where all sorts of ingenious new ideas and designs come from. “But it’s still the same do-ityourself mentality.” Casey Forbes noticed an “explosion” of knitting sites in 2006, when he and Jessica, both 30, began to design Ravelry.com from their Boston apartment. “Jess was a knitter and was always looking for information on a pattern or yarn,... but it was scattered across the Web,” Casey Forbes said. “We thought, ‘Wouldn’t it be cool if we could put it all together in one place?’ ” Although enthusiasts have several knitting Web sites from which to choose, and often belong to more than one, Ravelry.com is one of the largest. Rosie Reeder, a knitter from Lancaster, Pa., described the online and knitting cultures as complementary, and said the connection has opened up “a whole new world” for knitters. “How could we ever pick this many people’s brains, in one place, except online?” the 57-year-old said Wednesday evening, gesturing toward the packed lobby at the convention center. Members can look up stitches, patterns and fabrics while documenting their own progress with images of their work. In forums, members chat about everything from politics and Broadway musicals to their love lives and penchant for Dr. Phil. Erin Chesnut, a Westerville resident in her mid-20s, is “completely engrossed” in Ravelry.com, clocking in for two or three hours a day to check out new patterns and post comments in forums. Last year, when Chesnut lived in Dayton, she organized a group of Ravelry members to meet in person once a week. She has organized the same type of group in Westerville. “I work at home,” she said, “so getting to go to a knit night is human interaction.” On Wednesday morning at the convention, which is sponsored by Knitters Mercantile, a Columbus knitting store, about 300 women settled in with their needles and yarn in classes such as “The Art of Knitting Backward” and “Crocheted Shawl Workshop.” Outside the classes, five women, all older than 50 and strangers before the convention, sat around a table and chatted, never missing a stitch. Two said they used Ravelry.com — whose name combines unravel and revelry — and other knitting sites for tips. Debbie Squire of Indianapolis assured the others, “You don’t have to chat on it or anything.” The women nodded and — with pens in one hand, needles in the other — asked how to spell Ravelry. alieberman@dispatch.com 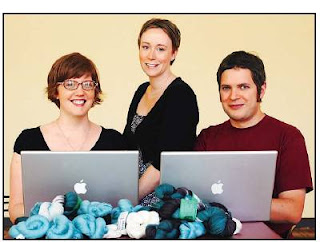 Email ThisBlogThis!Share to TwitterShare to FacebookShare to Pinterest
Labels: Knitting